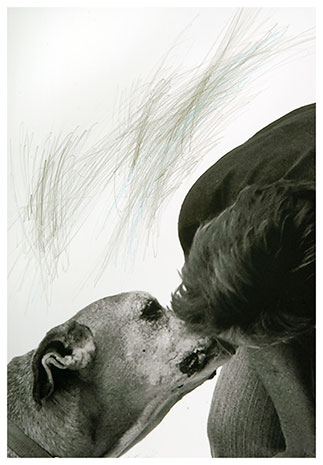 Face to Face considers our complex relations with those animals closest to us – our pets – at a time when the animal and human interaction is increasingly under scrutiny as research evidences new findings about animals’ intelligence, their ability to think and their capacity to feel both pain and emotion.

Broad social forces of change have brought about a wide range of philosophical, ethical and emotional changes in our attitudes to and relationships with animals, particularly pets. Humans have deeply intimate relationships with their companion animals. Pets are welcomed, loved and treated as a member of the family, given human names, provided with specialist medical and palliative care when they are ill and/or aged, mourned when they die and buried in pet cemeteries with the rituals associated with human burial.

Face to Face interrogates the intensity of our relationships with our pets, through the gaze or reciprocal gaze. To a large extent our encounters with animals are mediated through our eyes. That is, just as looking at other humans and being looked at by other humans, according to psychologists, are fundamental in human social behaviour, looking and direct eye contact play an important role in animal-human interaction.

The works also touch on the moral responsibility we have for animals as well as the addressing the continuity and boundary blurring that exists between animals and humans: as the philosopher Noske terms it – the ‘animallikeness’ of humans and ‘humanlikeness’ of animals. Face to Face reflects a state where we cease to be mere outside observers of animals.

These mixed media and installation works engage with animals in ways that suggest the boundaries and borders between humans and non-human animals are becoming more permeable.