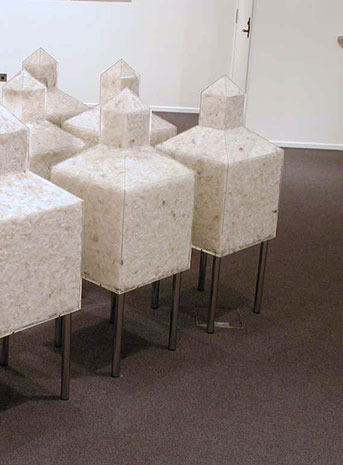 The enquiry of this body of work is our ethical relations with other animals and especially our exploitation and commodification of them. I am particularly concerned with the dichotomies and dilemmas that exist in our relationship with animals, which allow us to identify and bond with some species while, at the same time, detach and disconnect from others. I attempt to interrogate the boundaries between the species of animals, particularly, that sharp line we draw between ourselves and other animals which give us permission to use and abuse these animals.

Domesticated animals, such as cows and horses, have had a long continuing association with humans. Since our early ancestors first depicted them on cave walls, these animals have represented, for us, a complex mix of symbolic, metaphoric, religious and cultural meanings. Farm animals, in Western culture, are consigned a commercial value, which compounds the exploitative relationship we have with them and, therefore, colours our perception and treatment of them.

The focus of Animal Matters is ‘the animal’. This embraces not only the form and appearance of the animal itself, but also their actual material or substance, such as hair produced as industry by-product or waste. Through locating horse tail and cattle tail hair in pristine Perspex tubes, the reality and the presence of the material are more powerfully evocative of the sense of the animal, of which the material was once a part, than the representation of these materials with paint or pencil. The term 'matter' not only refers to the substance derived from animals but to issues and concerns that centre on our ethical relations with and exploitation of animals and matter refers to the importance of animals to our lives and the planet we share with them.